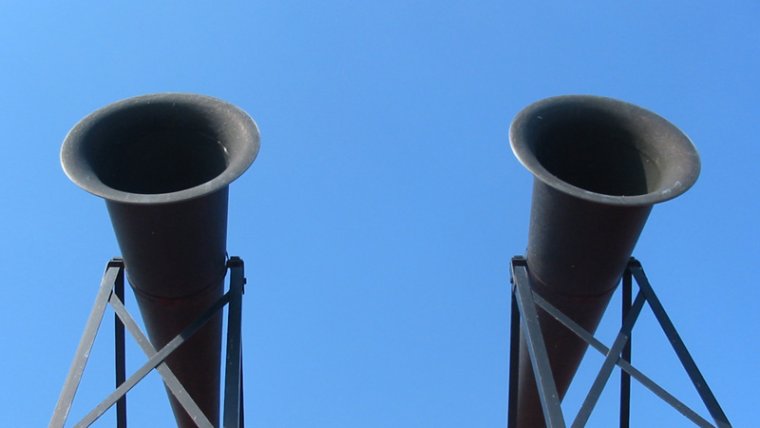 "Split Rock Lighthouse features a compressed-air fog signal housed in a separate building 50 feet east of the tower. The twin horns point eastward toward Lake Superior. During operation, the fog signal emits a two-tone ("beeeeeeee-ohhh !) blast that lasts for two seconds. After 18 seconds of silence, the blast repeats. The signal was originally steam-powered, but now twin gasoline-powered air compressors now power the signal. The original engines were replaced in 1932 and finally removed in 1961." Source : Split Rock Lighthouse sur lightstations.com

"The fog signal originally consisted of duplicate six-inch sirens excited by air compressed by a twenty-two horsepower gasoline engine (...)Replica foghorns were placed atop the fog signal building in 1979, and the following year the dwelling nearest the lighthouse was opened for tours. " Source : Split Rock, MN sur lighthousefriends.com

"Split Rock Lighthouse is a lighthouse located southwest of Silver Bay, Minnesota, USA on the North Shore of Lake Superior. The structure was designed by lighthouse engineer Ralph Russell Tinkham and was completed in 1910 by the United States Lighthouse Service. It is considered one of the most picturesque lighthouses in the United States. In 1940, the station was electrified and the lamp was replaced with a 1000 watt electric bulb, and the incandescent oil vapor lamp was moved to Au Sable Point Lighthouse in Northern Michigan. Split Rock was outfitted with a fog signal housed in a building next to the light tower. The original signal was a pair of sirens driven by two Franklin 30 hp (22 kW) gasoline-driven air compressors manufactured by Chicago Pneumatic Tool Company. In 1932 the gasoline engines were replaced with diesel engines. The steam sirens were replaced with a Type F-2-T diaphone (be-you) type signal in 1936. The station and the fog signal were electrified four years later, but was discontinued in 1961. The light was retired in 1969 by the U. S. Coast Guard. The lighthouse is now part of the Split Rock Lighthouse State Park and is operated by the Minnesota Historical Society." Source : histoire du phare de Split Rock sur wikipedia

"Approximately forty feet to the east of the tower, the fog signal was constructed of the same Cream City brick as the tower. Located on a single bed within the building, a pair of 22-horsepower gasoline engines drove two large compressors which supplied compressed air to the duplicate Type 2-T diaphone fog signals with their large trumpet-shaped resonators protruding from the lakeward side of the building in order to project their sound five miles across the lake. The "2-T" designation for the diaphones indicated that they were of "two-tone" design, providing the quintessential melancholy "Bee-Oh" sound every 20 seconds. The fog signal was so loud that it reportedly made horses skittish five miles away in Beaver Bay, and caused guests at Slater’s Hotel to ask what wild animal were making such a racket." Source : Split Rock Light from Seeing The Light, lighthouse of the western Great lakes